Because burial space was running out at the Parish Church of St. Helen's, land at the end of Mill Lane was purchased from Ian Fulford several years ago to develop as a burial ground. Locally known as The Burial Ground since it was developed, in 2019 the name was changed to Sharnford Cemetery.

During the winter of 2008/9 tree planting was carried out around the perimeter by the village Environment Group and Parish Tree Warden. The trees were provided under the free trees scheme from Leicestershire County Council. Since then additional hedging and trees have been planted.

Local contractors JD Excavation carried out the works on the car park and entrance in 2010, the entrance, gates and fencing were completed in March 2010. Final surfacing started in April and Severn Trent Water connected the water supply.

Landscaping the cemetery is an ongoing venture with the Environment Group spending many hours of their free time. Several residents and councillors have sponsored trees. Ornamental trees have been planted including Silver Birch, Acer, Sorbus, Walnut and a Holly. We have a superb bench donated by Pat Gibbs, in memory of her late husband David, who was a driving force many years ago when the idea of a Burial Ground was first mooted.

For details of plots, costs and regulations, contact the Clerk to Sharnford Parish Council. 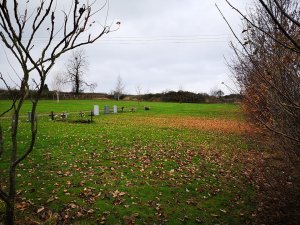 The Children's Playground and Fitness Equipment Annual Inspection Reports are available to view.

Also, available to view is the Tree Inspection Report.