Sharnford Parish Council provides your local services. We strive to make Sharnford a better place to live, work and play. Our website includes a wealth of information about how we conduct business and what we do. Use the search or browse the site to find whatever you are looking for. If you can't find the information you require then please contact us.

Councillors have refused plans for 165 homes in Glen Parva after developers failed to show how plans could accommodate potential landfill gas mitigation measures.

An application to build 165 homes on land off Cork Lane, Glen Parva was given outline approval in 2016. A Reserved Matters application was received by the Council in 2019 which sought approval for the appearance, landscaping, layout and scale of the development. More »

Concerns were raised for the safety of the surrounding neighbours and the future occupiers of the site. Following the appointment of an independent landfill gas consultant to analyse the information provided, five years of additional data gathering was recommended to inform what gas mitigation would be required.

The independent report also concluded the site's layout could not be approved until these mitigation measures were known.

Whilst the rest of the application is deemed acceptable, Blaby District Council's Planning Officers recommended the application for refusal as these issues were "…not outweighed by the material considerations in favour of approving the scheme, including the delivery of 165 dwellings…and the economic benefits of the construction process and occupation of the dwellings".

The application was refused by members of Blaby District Council's Planning Committee at its meeting on Thursday 19 May.

Councillor Louise Richardson, Planning Committee Chair, said: "We were pleased to support the Officer's recommendation to refuse this proposal. Members of the Committee were greatly concerned that nowhere near enough had been done to understand if the plans could accommodate future mitigation measures of this former landfill site.

"We hope this sends a message to residents and developers that anyone who wants to build on landfill sites must present robust and acceptable plans. We will not gamble these potential benefits for long-term health risks."

The refusal of this Reserved Matters application also means that the original Outline planning permission has now expired unless the applicant chooses to appeal or legally challenge the Council's decision. » Less

We are now accepting nominations for the Sharnford Jubilee Cup 2022 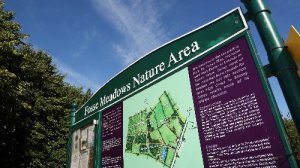 Leicestershire County Council will be closing Roman Road, leading to the car parks to Fosse Meadows from Monday 16 May until Friday 05 August, between 7am-4:30pm each weekday.

The County Highways team will be undertaking essential maintenance works and as a result there will be no access to our car parks from 7am-4:30pm.

Access for residents and emergency services will be maintained throughout by the use of LCC Highways marshals
Public access to Roman Road will be available: More »

The County Council team will be giving access to the car park for our planned event between 20-22 July.

We have ensured that Il Cappo de Café will get access to the site every day so they can continue to serve customers.

Details about the works by Leicestershire County Council can be found by using the link below. » Less

The Children's Playground and Fitness Equipment Annual Inspection Reports are available to view.

Also, available to view is the Tree Inspection Report.